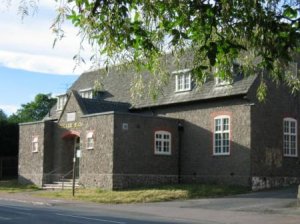 The village hall is on the Main Street next to the Bradgate public house. Originally built in wood, the present building was built in 1930 by Lindsay Everard of the well known brewing company.

In 1972 Everards granted the Parish Council a lease at a peppercorn rent provided it was managed by a competent committee.

It was refurbished in 2001 and is indeed run by a competent Committee of Representatives from many of the village organizations and headed by the Chairman, Toby Manning. He replaced Michael Upstone in 2014, and is the latest in a long list of past Chairman who have all worked extremely hard to keep the building in good repair.

The Village Hall Committee are Trustees of a Charity (Number 503283) and who operate under a Trust Deed.

A ventilation and P.A. system was installed during the summer of 2007 and is proving highly effective.

In 2016 a wireless broadband router was installed. The password is available on a notice in the rear lobby of the Hall.

Also in 2016, with financial assistance from the Gardening Club, a large screen was installed enabling the Hall to be used for slide shows, films and other similar events.

The postcode for the hall is LE6 0AE.

The Committee has adopted a Health and Safety Statement which governs use of the Village Hall, and has also agreed a Safeguarding Statement. The Conditions for Hire are given below.

Over the summer of 2020 the Village Hall has been closed with the exception of the Pre-School which has been open for key worker children.

As lock down is steadily eased, we are re-opening the Village Hall for bookings provided that the Hirers can demonstrate that they can abide by the current Government Guidelines.

Hirers will need to complete a Risk Assessment - a template is given below.

Here are some photographs of the interior of the Hall.

The facilities may be hired for private functions. the Bar facilities are good.

In 2013 a Defibrillator was fitted in a box in the doorway on the side entrance of the village hall. Anyone can use it.

It is available for all to use and has clear instructions on it.

Associatted with the defibrillator is an Emergency Telephone System (VETS scheme) to provide help in situations where someone needs to stay with the person experiencing the cardiac arrest. They will give help by fetching the defibrillator from the Hall and bring it to you.

In the event of a suspected cardiac arrest:

Firstly call 999 for an ambulance - this is very important.

Then call 01530 382 385. Your phone call wll be answered by a volunteer who will collect the defribillator and bring it to you.

If you would like to be one of the volunteers who are on call out to take it to a resident's home, or for further information, please contact Councillor Dr. Sue Pritchard (telephone 01530 243119).