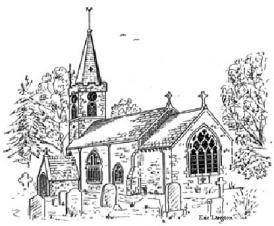 On most days and more particularly on sunny summer's days, it is a common sight to see visitors leaning against & even sitting upon the coping stones of the churchyard wall bordering Bradgate Road. From this vantage point can be obtained good views of All Saints Church and the memorial stones to past members of the Community. It is then almost "compulsive viewing," to go into the churchyard and investigate some of the memorial stones. It may be the family names or the epitaphs which attract churchyard strollers. One very young visitor even suggested that a skull & crossbones on one memorial meant that a pirate was buried there. The reasons for starting the search may be varied but, in the end, the pleasure and satisfaction of a detailed study of shapes & sizes, inscriptions & epitaphs and the human stories connected with the study become overwhelming. In this survey we hope to reveal a large part of the story of the churchyard at Newtown Linford and perhaps encourage further interest in the people who lived, worked and died here.

All Saints Church was made a Grade II* listed building in June 1966 for the following important features.

as published by the Charnwood Borough Council

The records for All Saints Church show the Clergy from 1537 the year when Lady Jane Grey was born including the present Clergy. The writer is in contact with the relatives of some of these people and information and photographs will gradually be added. These are the Clergy who have their names inscribed at the back of the Church. There has been other Clergy over the years who have regularly officiated at All Saints and these are recorded below.

In 2000 the copy which has been in use in the church since the survey was completed had deteriorated to the point where much of the typescript was illegible, and unsuitable for further photocopying. This copy was produced by scanning, and on the sketches of the stones, the outlines and decoration retained, touched up only where necessary. However all of the text content on them was retyped, retaining as closely as possible the original spacing. No attempt was made to check spelling or alter any detail, or to update the section on the new burial ground. The descriptive text was printed by OCR (Optical Character Recognition) and only retyped where necessary. Whilst every care has been taken, it is strongly recommended that the actual stone be visited to check details intended for inclusion in family histories. The Register of Burials kept in the church goes back to 1934, and can be inspected by arrangement with one of the churchwardens. Prior to that date, the records are held at the County Records Office in Wigston, (Tel. No. 0116 2571080 Burials of Cremated Remains in the Garden of Remembrance are shown in the Book of Remembrance in the display case.

An archive of photographs is gradually being assembled. If you have any photographs you would like adding, please contact us.