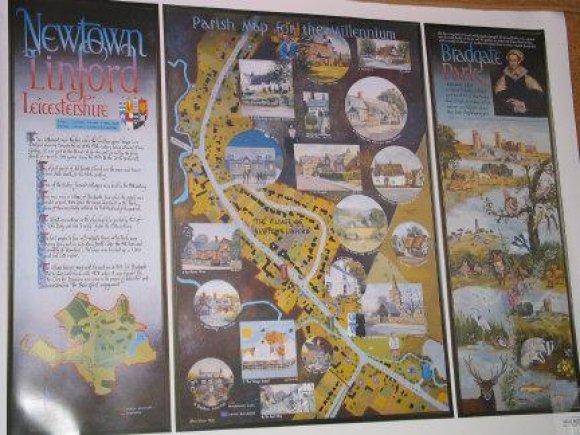 is celebrated by the making of a Parish Map, created by villagers, which is installed in the Church, with poster-sized versions for each household and by a commemorative stone and seat on Groby Lane. On Millennium night there was a Service of Preparation in the Church, followed by two alternative (free) parties: one in the Village Hall with a Swing Band, and the other in the Bradgate Hotel with a disco. At midnight there are fireworks in the pub Car Park. Later in the year a Sunday lunch and entertainment is provided for some of the oldest residents.

The mural in the Church was painted in the main by John Nixon of Main Street with some of the houses being painted by some of his art class that meet on Friday mornings. It depicts well known figures of the past and present such as Tony Enderby (the village bobby), Nigel North and Gwen Wakefield who was born and lived in the village all her life. It also shows the Rev. Peter Sheriden who lived in the Vicarage at the time.

Bradgate Park is closed due to foot and Mouth Disease precautions.

The first Scarecrow Weekend is held

Meg Clark dies at the age of 82. She and her husband Derek had been Parish Councillors for many years.

Keith and Gill Mowlem become landlords of the Bradgate

Tony Enderby from Roecliffe Road dies. He served in the Leicestershire Police force all his life and for a large part of it was the Village Beat Officer. He was a Parish Councillor and the Neighbourhood Watch Co-ordinator at the time of his death.

The village boule group is reformed by Des Bates.

A seat was erected on Markfield Lane in memory of Tommy Buckley who lived with his wife Jean nearby.

The Parish Council implements a Village Bird Box scheme which provides boxes for birds and bats in the Churchyard and Cemetery. Michael Webster erected them.

The Gardening Club renovates the three flower beds in the cemetery. The Bradgate Nursery donates £50 worth of plants together with a bag of Spring Bulbs.

David Wood, President of the Cricket Club plants a replacement Oak Tree in the field behind the Cricket Field donated by Lord Deremore, the Club's Patron to commemorate Queen Elizabeth II's Golden Jubilee.

Radio Leicester visits the Village Hall to record 'Down to Earth' with the Gardening Club.

The village hall is closed until January 2004 for a major update at an estimated cost of £200,000 The money was raised by various grants and a Public Works loan.

An Oak tree is planted by the Millenium Stone on Groby Lane. The tree had self set in the garden of Rhona Warrilow and she had tended and nurtured it until it was three feet high.

Iris Heap dies. Resident of the village since 1968 and long time post lady. Her friendliness, her quiet manner and willingness to help all will always be remembered in the village.

Sheila Langton retires from leading the Sunday School for 25 years. She chose for her gift to be sent to the 'Send a Cow' project which provides half a cow for the community in Africa.

The Brownies celebrate 90 years by attending an event in Thurmaston. (Brownies nationally not the village pack)

The village Garden Centre closes and is sold for building development. This is now Stamford Rise.

The Parish Council begins work on the Village Design Statement. This is now used as a guidance by Charnwood Borough Council when considering planning applications. It can be read on the Parish Council website which has a link from this site.

This year the north side of the roof of the Church requires renewing after 100 years.

Mark and Olga Whenray leave the Post Office due to Olga's ill health. They had been part of the village community for a number of years and Olga sang with the Choral Society. She used the small shop next door for a bridal gown shop and would be brides came from far afield to purchase their dresses.

Joan Stevenson the author of the time-line up until 2000 passes away in LOROS. She also wrote many books on the village, Bradgate park and Leicestershire history. She was a very active member and past President of the Newtown Linford WI.

The Quorn Hunt founded over 300 years ago faces the last legal day for Fox Hunting with dogs.

Peter Neaverson passes away at the age of 75. He had lived with his wife Janet in the village for 37 years. He was a past Vice Chair of the Parish Council, Vice President of the Cricket club and a member of the group formed in the village to take on the lease of the Village Hall from Everards Brewery.

Everards have sold the Bradgate and it reopens under the ownership of the Mulberry Pub Co. Lts.

David Snartt resident of the village is elected as a County Councillor for the Bradgate Division.

Rachel Green is co-opted onto the Parish Council

Lilian Clarke of Main Street forms a Group to raise funds for the installation of a Loop Hearing System in the village hall.

The WI celebrates it's 80th Birthday. It was founded in 1925, the year the Bradgate Estate was sold. The Auction raised £226,000.00. Mrs. Hazelgrave the wife of the Grey Estate Agent was the first president of the WI.

June The Post Office facilities were taken away from the Village Store. Residents could no longer collect their pensions and everyone had to travel at least two miles in any direction to obtain what had always been taken for granted would be available in a Post Office.

July The Sunday School Rooms were refurbished and became a bright and cheerful venue for activities such as the Welcome Club, Sunday Specials for the young and the Brownies. The work was carried out by Yeomans Decorating following the colour scheme developed by Monica Barker a long time resident of the village.

August Grants of over £90,000 are obtained by the Parish Council, the major being from Biffa, to enable the make over of the Playing Fields in Grey Crescent. These fields named the Bob Bown Memorial Field were officially opened on Saturday, 27th September. Bob Bown was Chairman of the Parish Council for over 20 years and in the late 1950's headed the collection of over 32,000 signatures on a petition which resulted in the M1 motorway being diverted from the village. The village will be forever grateful to him.

20 mile an hour speed signs are erected by the Village School to operate at the beginning and end of each day to ensure the safety of the children.

The village takes silver in the Rural Community Council Village Achievements Awards in the Community Category for the Scarecrow Weekend.

September - extension to the Church begins to provide a disabled entrance, toilet and kitchen facilities.

August The Daily Telegraph reveals ... The top ten places to start a family

Ken Waterfall Chairman of the Parish Council retires. He became a Councillor in 1979 and Chairman in 1988.

May - Eight homes on the Main Street open their gardens for the NGS charity.

August - Lydia Knott retired as Parish Clerk after 45 years. Pam McMorran becomes Parish Clerk. A position she does voluntary for the first year as the position cannot be salaried until a year after resignation of Parish Councillor.

January - Copper Beech in the Churchyard had to be felled due to decease. New one planted in it's place by the Friends of Charnwood Forest.

March Dead Oak Tree on Bradgate Road carved by Peter Leadbetter into a Staggs Head. Paid for by the Friends of Charnwood Forest and donations by residents.